The hillfort dates back to the 1st millennium – the beginning of the 2nd cent. Mineičiai Hillfort is also known under the name Sudeikiai. It is situated on a separate hill, 150 m eastwards from the eastern shore of Lake Alaušas. The site is square in shape, size 30x18 m. Some lined and rough ceramics have been found in it during the investigations. On the southern edge there is a 0.4 m high, 6 m wide earthwork. 2 m below the southern edge of the site there is a 9 m wide terrace, behind which there is a 6 m wide, 0.2 m deep ditch. The second 0.3 m high, 5 m wide earthwork is across the ditch. Behind this earthwork there is the second 4.5 m wide, 0.2 m deep ditch, the third 0.4 m high, 7.5 m wide earthwork and then the third 6 m wide, 0.2 m deep ditch. Southwards across the ditch there is an earthwork-shaped natural 1.5 m high elevation. On the northern slope, 4 m below the site there is a 9 m wide terrace. The slopes are steep, 10 m high.
The hillfort was destroyed by ploughing that ruined its earthworks. At the end of the 19th cent. 4 earthworks were mentioned: two larger on both edges of the site and the smaller ones on the slopes. It is mentioned that from the eastern aspect there was a 6.5 wide entrance to the hillfort and it was protected by 23 m long, 1.4 high earthworks. The foot settlement of the area of 7 ha was around the hillfort where fireplaces, molded ceramics, clay plaster and bonfire sites have been found during the investigations in 1996.
Legend has it that in olden times there was a church and fortifications of Lithuanian dukes on Maneičiai Hillfort. 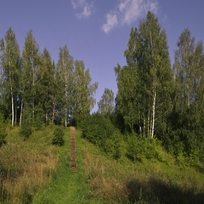 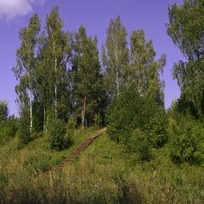 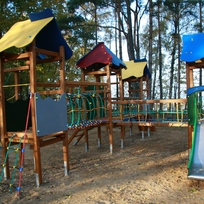