Saldutiškis estate is in Saldutiškis village, Utena district. According to linguists, initially, the village was called Salgudiškis, which meant an area populated with gudai (southeast neighbors of Lithuania, the word originating from ghudos), an island. It is said that once there was a swamp in that place. The former estate had fresh water- there is a well and one can see how pure the water is and how tasty it is.
Saldutiškis estate was already known during the period of unionist Lithuania, which was mentioned from the end of the XVIII century. The Jaloveckiai ruled it. Antanas Jaloveckis (1772-1852), considered to be the founder of the estate, is buried in the Trinkūnai cemetery. In 1890, the estate had quite a few remote villages: Antalamestė, Krivasaliai, Plaučiškės, Trinkūnai, Pakieveniai, Pavyžinčiai, Varniškės, Vilkolakiai, with 59 residents. Before the World War I, the estate belonged to a military engineer Boleslovas Jaloveckis, who built the manor house with farm buildings, planted a large park, gardens and flowerbeds, larch trees in some areas of the forest. Saldutiškis settlement started to emerge in 1899, after construction of the narrow gauge railway Panevėžys-Švenčionėliai, the chief of the construction was general Boleslovas Jaloveckis, grandson of Antanas, the estate founder. At the time, a road, with poplar trees along it, connected the narrow-gauge railway station and the manor. Boleslovas Jaloveckis was a very rich man, as he ruled a large part of the Russian railways and the metallurgical industry shares; he was a deputy of the Tsarist Russia Duma from eastern Lithuania, who generously supported Lithuanian refugees in Russia during the World War I. During this war, Saldutiškis was a county center. The only son of the landowner, Mečislovas (1876-1962), was well educated; he had served in Vilniaus Žemės Bankas. He toured the whole of Lithuania, knew it quite well, and painted 1500 manor buildings in watercolor. District military commandant occupied Jaloveckis manor. Old classical style manor house was repeatedly reconstructed, other buildings changed their purpose. At the end of 1907, Mečislovas Jaloveckis set up Saldutiškis Society of Agriculture, bringing together farmers from the surrounding areas. In 1907, Boleslovas Jalovecki s published books in Vilnius in Lithuanian and Polish, such as “Lithuania and its affairs“, “National Lithuanian catechism”. From 1909, he collaborated for the newspaper Litwa, published in Vilnius. In 1917, Boleslovas Jaloveckis died of fever in St. Petersburg. The manor has lost its true master. After his father's death, son Mečislovas returned to Lithuania, but did not stay in Saldutiškis. He went to Poland, and died in 1962, in London. In 1938, Salesian Monastery started its functioning in the manor until the World War II. In 1940, the monastery closed. During the war, it functioned as a hospital. After the war, “stribai” (members of the Civilian Armed Soviet forces who helped the invaders to carry out repression in Lithuania in 1944-1954) founded their headquarters in the manor.
After Lithuania regained its independence, during the Land Reform, the center of the estate was given to the municipality and Labanoras Forest Enterprise while the manor house itself - to the emerging new parish. The first priest was pastor Stasys Švėgžda, who also engaged in the construction of the church. For this purpose, the stone manor barn was adapted, on a high foundation of which wooden part of the church with two towers was built. In 1918, Linkmenų District Board settled down in the manor house.  Later, a school was built in the area, which destroyed the manor ensemble atmosphere. Several original buildings of the estate were demolished during the construction of the school at the time. Currently, the manor is privately owned.

Boleslovas Jaloveckis founded a rare plants dendrology park near the Saldutiškis estate. The area of the park is 11.9 hectares. It has 22 tree and shrub species. There is a 150 m long alley of small-leaved linden, huge elm trees (diameter 1.4 m). There are some valuable introduced species - Red leaved maple (Acer platanoides Red), silver fir (Abies Alba), gray walnut and others. In 1958, the park was declared a natural monument. It is still under protection.
The manor house (built in 1830 and reconstructed in the second half of the XIX century), remains of the barn (built in 1843, the  walls of which were used for  construction of St. Francis of Assisi Church in Saldutiškis in 1928), ice house, (built in the beginning of the XIX - the end of the XX century), remains of the barn and stables (built in 1898), and Jaloveckiai family cemetery comprise Saldutiškis Manor building complex of the Neo-classical historical period. Currently, Saldutiškis estate buildings are private. 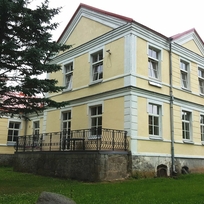 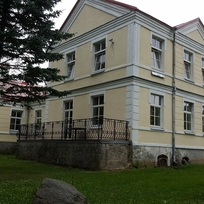 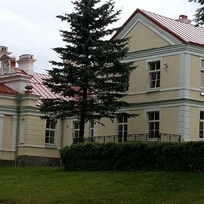 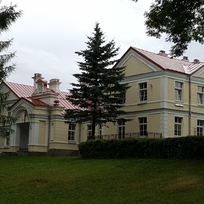 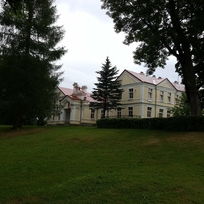 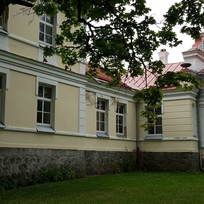 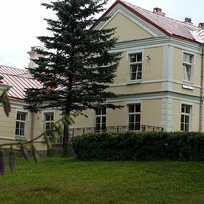