Bikuškis Manor estate (Bikuškis village, Utena district) is located in the peninsula of the lake Alaušas, in its western horn, the steep slopes of which descend into the lake, while in the south-west it descends into the ravine. A line of acacia trees, which once crossed the farmyard, marks the way to the former parterre. Bikuškis estate is an architectural monument.
The Manor was already mentioned in written sources in the middle of the XIV century. The estate was forming during several stages- the early stage (XVII-XVIII c.) and the main stage (the end of the XVIII c. - the beginning of the XX c.). Both stages left traces in the estate composition - during the first stage, relief and structure of the estate was formed (entrance, the place of the main representational yard), during the second stage, local architectural and classicism characteristic features were added.
In the XVII century, the estate was the property of the Radvilos, later it belonged to Tadas Oginskis, the governor of Trakai, later, in the XVIII c. - to the Prošinskiai, who obtained a privilege from the ruler Stanislaw August Poniatowski to establish a city next to the mansion. According to historical sources, in 1782, Elžbieta Prošinskienė built a chapel near the lake where a priest- the chaplain of the manor- lived. At the end of the XVIII century, the manor belonged to the Plevakai, in the beginning of the XIX century- to the Beneckiai, later- to the descendants of the Beneckiai- the Drazdauskai. During the rebellion of the 1863, the rebels were hiding in the mansion. At the end of the XIX c., villages of Juliškis, Kiemeniškis, Malena, Novosiolka, Sirutiškis and Toleikiai belonged to the estate, with the spirits factory functioning, a huge smithery; the estate owned more than 500 hectares of land. In the beginning of the XX c., the estate was owned by the Puzinauskai, during the inter-war period – by the doctor Svilas, who married Puzinauskaite. After the World War II, the manor belonged to the Sudeikiai collective farm. From 1974, it belonged to Utena Construction Company (Utenos statybos trestas). In 1976-1979, the manor underwent great reconstructions. The manor house was renovated, remains of the buildings of the seventeenth century were demolished, cottar houses (in 1980), as well as the barn were demolished. Instead, new type facilities- stairs, sauna, playing ground - were built, which destroy the authenticity. In 1992, R. Svilas from Klaipeda regained Bikuškis estate: the manor, barn, granary, and 77 hectares of land, instead of the original 150 hectares. After his death, Gintaras Eugenijus Gruodis inherited the estate.
The foundations and masonry remains mark the place of the demolished buildings. They formed two rectangular courtyards: in the west, there were two barns, a stable and the remaining granary; in the east, there was a stable of the angular shape, cottar house, manor house and smithery.
Today, the estate consists of three original buildings or its remains- the manor house (folk classicism building) from the beginning of the XIX c., the barn from the XVIII c., which was rebuilt at the end of the XIX c. and XX c. The barn was originally built as a farm building. There are also remains of the shed, fragments of the road network and a sparse park.
Bikuškis Manor Park is a part of the original estate park. Total area of the park is 10.9 hectares; trees cover 3.5 hectares of it. Eighteen tree and shrub species have been recorded. Seven of these are introduced species. Maple, beech, elm, lime-tree, ash, thorns and other species grow in the park. Thinning has been done to the park.
The current owners of the estate are entrepreneurs Dalia and Gintaras Gruodžiai, who have been managing the estate since 1996. They renovated the manor and raised it to life at their own expense. For many years, the estate has hosted painters’ symposiums, professional theater plays, and symphonic music concerts. The estate runs an art gallery (the paintings created in the manor). A granite sculpture park is being established.
Bikuškis manor, according to the Department of Cultural Heritage, is a unique object. It is believed that the manor was one of the few residences of brick buildings built in the XVII century, so there is a potential for archaeological studies. In 2009, October 2, Bikuškis manor was declared a state-protected cultural heritage site under the Order No. ĮV-540 of the Minister of Culture Remigijus Vilkaitis. It will be protected and accessible for the public with educational needs in mind. 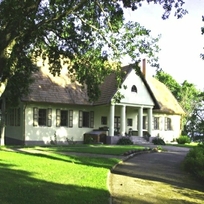