Saldutiškis is tucked in among forests and lakes, a settlement that arose next to a railway line, and is now an eldership. The town’s history is intertwined with the Jaloveckis family, the owners of the manor. At the beginning of the 19th century, Antanas Jaloveckis (1772–1852) bought the manor. At the initiative of his heir, the public figure and military engineer General Boleslovas Jaloveckis (1846–1917), the Saldutiškis settlement began to take shape after the construction of the narrow-gauge railway line Panevėžys–Švenčionėliai in 1899. The growth of the settlement was especially stimulated by the logging company that began operations here in 1927 due to the convenience of transporting logs by railway. Saldutiškis became a more attractive place to live; the town square and the streets were paved with stones, and the wooden sidewalks were replaced. Even now, one can walk down Saldutiškio Stoties gatvė (in English, “Station Street”) on the old paving. The little street leading toward the former railway station looks as if it has been prepared for a period film set in the old days. Next to the railway station building, a roofed pole (a traditional wayside shrine) was erected in 2006 in memory of 14 June 1941, the day when the mass exiling of Lithuanians to Siberia began. Another monument along the street reminds the visitor of history: the 1928 monument marking the first decade of the independent Lithuanian state. Visitors interested in history can stroll through the Saldutiškis Manor Hill cemetery on the edge of town. The buildings of the heart of the town, the old manor, have been repeatedly rebuilt, and have been used for various purposes over the years. Returning from Russia in 1922, Father Antanas Maciulevičius (1882–1968) set up a chapel in a hall of the manor and began to hold services there. In 1923, Father[A1] Juozapas Kukta founded the parish. In 1924, Father Stanislovas Švėgžda, the pastor, having returned from Russia, took up the task of constructing the church. Part of the manor house was used as the rectory, and the manor barn was converted into a church, with the wooden frame and the steeples placed onto the stone masonry walls. The Church of Saint Francis of Assisi opened its doors to parishioners in 1928. That same year, an organ with wooden pipes produced at the beginning of the 19th century was brought from the Kuktiškės chapel. This historical instrument continues to be played in the church even today. In 2000, at the initiative of Father Jurgis Kazlauskas, the churchyard was paved with stones: 50 stones symbolise the Rosary, and the names of surrounding streets and villages marked on each stone bear witness to the unity and community of the faithful. The churchyard is also adorned with two wooden sculptures of Saint Francis of Assisi, the patron saint of animals and nature. As we travel around the Utena area, let’s get to know the town of Saldutiškis and the surrounding area, the next-door neighbours of the mysterious Labanoras Forest! 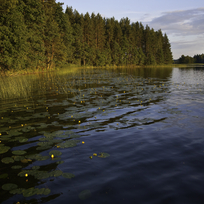 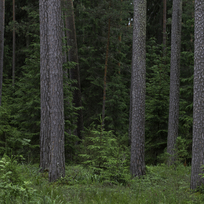 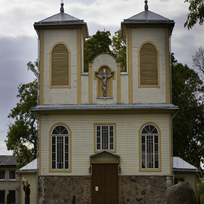 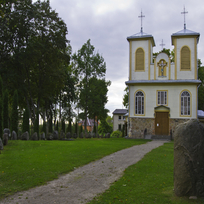 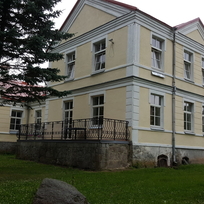 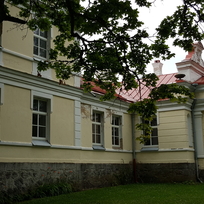 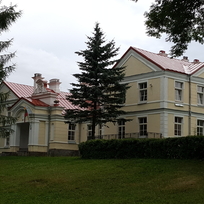 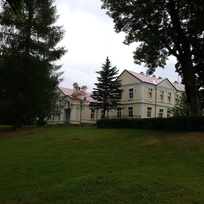