The hillfort dates back to the 1st millennium – 15th cent. It is one of the most beautiful and largest hillforts in Lithuania situated on the headland, which is northeast surrounded by the rivulet Pilius, and southwest - by Pilupis. The site is V-shaped, oblong, 70 m long, 40 m wide southeast, 19 m wide northwest. On every side the site was surrounded by an earthwork. At the southeast foot there are the remains of a 10 m wide road. The slopes of the hillfort are steep, 16 m high, and they are formidable even today, several decades afterwards. South-eastward from the hillfort there is an outer bailey. Its site is V-shaped, 160 m long, 55 m wide at the north-western end, 130 m at the south-eastern end. Some rough and clay ceramics have been excavated from it.
Užpaliai Castle was on the hillfort. In March 1373 the outer bailey of the castle was attacked and burnt down by the Livonian Order that killed all the people who were there and seized 70 horses. In the beginning of February 1433 the castle was burnt down by the Livonian Order but it was rebuilt in the short run because it was planned to arrange the meeting regarding the adjustment of borderlines with Livonia here in 1453.
People tell from generation to generation that at one time the noble palace was built on the hillfort and a powerful ruler with many soldiers and servants lived in it. One day the ruler’s reconnaissance officers informed that a giant enemy army was approaching. The scared ruler ordered his serfs to cover the palace with soil hoping that the enemies would take no notice of it. But there was a lack of air in the palace and all the people who were there died of suffocation. Only the hill reminding of the dim and distant past remained. 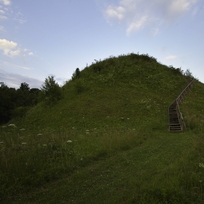 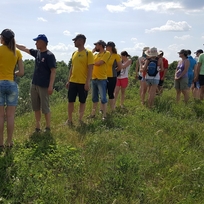 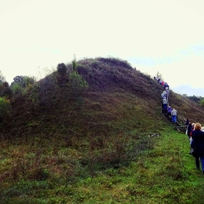