The hillfort dates back to the 1st millennium – the middle of the 15th cent. It is situated on the southern shore of Lake Tauragnas. The site is V-shaped, 90 m long, 22 m wide at the eastern end, 14 m wide at the western end. At the western edge of the site there is a 1 m high, 12 wide earthwork, at the eastern border – a 6 m wide, 0.4 m high earthwork. The slopes of the hillfort are steep, 13-14 m high.
The eastern part of the site was probably the basic place in the castle, and the western part was an outwork. At the western, southern and eastern foot there is a foot settlement on the area of 4 ha where a clay spindle, lined, rough, smooth and clay ceramics, clay plaster, iron slags have been found.
Tauragnai Castle was on the hillfort. It was mentioned on the 14th of February 1373 when the army of the Livonian Order, which devastated the land, stayed by the castle. At the beginning of February 1433 the castle was burnt down by the Livonian Order.
Old people tell that at one time a great oak grew on the top of the hill and a priest lived in its hollow and the vestal virgins attended the fire. When Christianity was founded, a church was built on the top of the hill but some time later it disappeared and now it is inside the hill. Legend has it that one day a brave man looked into that hole more carefully and saw a derelict church with ruined altars in the depths of the hill and dusted organ was playing inside the church. At exactly midnight of St. John’s Day the hillfort opens for just one second. Those who have good eyes can see the church and playing organ. 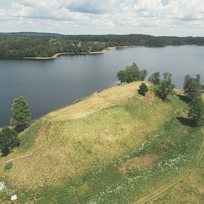 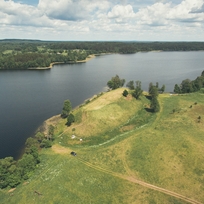 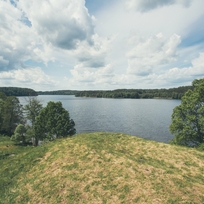 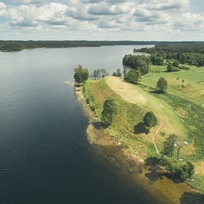