XV century Utena Manor was located near the Krašuona River. 19th-20th c. In the first half of the 19th century, the manor was ruled by Balsevicius, and they built the red-eyed palace, farm buildings, and planted gardens. 1918 Saules Gymnasium was established in the palace. 1931 The former manor house was heavily rebuilt, the pillars were destroyed, the neo-baroque décor was destroyed and the second floor of the building emerged instead of the attic. After the Second World War there was the 1st Secondary School. At present, the building of the old manor belongs to the Saules gymnasium. 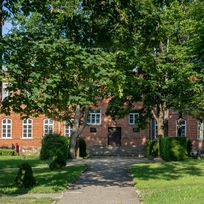